In lieu of our normal Q4 wellness and health news wrap-up, we’re ending the year with a different sort of news roundup. In the spirit of end-of-year reflection, we’ve put together a list of the most important stories related to health and wellness from all of 2022, rather than just the last three months. Some of these stories are brand new, some were highlighted in past wrap-ups — and all of them have implications for the health of you and your loved ones.

So without further ado, here are the most important pieces of health & wellness news from the past 12 months:

The Link Between Gut Health and Depression Grows Undeniable

Two new studies published earlier this month found a link between gut bacteria and depression. The studies included a combined 4,000 people of different backgrounds and controlled for a number of different variables, and both arrived at the same conclusion: levels of certain bacteria were associated with symptoms of depression. Specifically, they found that high levels of bacteria in the family Lachnospiraceae (among others) were linked to depression, as were low levels of bacteria in the family Ruminococcaceae. These studies, which are among the largest to date on the relationship between the gut microbiome and mental health, drive home the power of the gut-brain connection, which we covered in our June news wrap-up. Then, we were discussing two more studies on how gut health impacts mental health, including one showing that stimulation of the vagus nerve (which connects your gut to your brain) can be an effective treatment for therapy-resistant chronic depression, and another showing that switching to the Mediterranean diet alleviated depression symptoms. Interested in improving your own gut health (and thus your mental health)? Download our free gut health guide.

Speaking of gut health, a new study found that an unhealthy gut microbiome can help breast cancer spread to other parts of the body. The research, which was done on mice but then corroborated with evidence from humans, showed that the gut microbiome can influence the behavior of mast cells, which are blood cells that help regulate the body’s immune response to disease. When gut health is poor, it causes mast cells to accumulate in the breast, from where it can facilitate the spread of breast cancer. This finding has big implications, since when breast cancer metastasizes (spreads to other parts of the body), the survival rate is only 29%. The researchers believe that by identifying this link between the gut and mast cells, doctors may be able to prevent the spread and recurrence of breast cancer in patients.

Since the beginning of the pandemic, there’s been an increase in the rate of idiopathic precocious puberty among girls. The rare condition — which basically means when puberty begins before the age of eight for unexplained reasons — has spiked since March 2020, and one new study suggests a surprising reason: smartphone use. The study exposed 18 immature female rats to a spectrum of blue light that mimicked the light on smartphones, and found that the rats exposed to the light for longer periods of time showed signs of puberty earlier than the rest. The researchers believe that this is because blue light tells our body to stay awake, which lowers our melatonin levels; and though melatonin is known for making us sleepy, it’s also an important hormone, and so when its levels shift, so do the levels of other hormones: notably, the rats exposed to more blue light had lower levels of melatonin and higher levels of reproductive chemicals like estrogen and luteinizing hormone.

A non-profit consumer advocacy group tested various articles of clothing from popular athletic brands, and found dangerous levels of the chemical BPA in many. Specifically, they found that sports bras sold by Athleta, PINK, Asica, The North Face, Brooks, All in Motion, Nike, and FILA could expose the wearers to 22 times the safe limit of BPA! Athletic shirts from The North Face, Brooks, Mizuno, Athleta, New Balance, and Reebok had similarly dangerous levels.

BPA has been linked to diabetes, asthma, cardiovascular disease, obesity, cancer, and premature death, among other health issues, and it can be absorbed through the skin very easily and quickly — and given the fact that people sweat in athletic clothing, chances are high absorption rates are even higher in these cases. The non-profit group has sent legal notice to the companies, giving them 60 days notice to remedy their violations before a complaint is filed.

In terms of avoiding toxins in our daily lives, we often think of personal care products (see above), household products, food and drink and medicine, but many of us don’t think of clothing as something that can be harmful. This research is a reminder that what you wear matters too! Your skin is your biggest organ, after all, and it can be affected by what it comes in contact with.

In just the past two months, two major stories have broken linking common hair products to cancer. On the one hand, Unilever recalled many of its aerosol dry shampoo products — which included incredibly popular brands like Dove, Tresemmé, Nexxus, Suave, and more — after discovering that they were contaminated with the carcinogen benzene. In the very recent past, other popular aerosol products (like other dry shampoo brands and various sunscreens) were also recalled due to benzene contamination, suggesting that this isn’t an isolated issue but rather a problem with aerosols in general. Benzene, a known contaminant of petroleum products, can result in leukemia and other blood cancers.

Around the same time, research was released showing that women who used chemical straightening products — commonly used among black women — are at a higher risk for uterine cancer. Researchers found that using these products frequently (four times a year or more) more than doubled a woman’s risk of developing uterine cancer. The study in question followed more than 30,000 women over the course of 11 years, making these findings quite significant.

Both of these pieces of news underscore how important it is to use vetted, non-toxic products and to always seek out organic hair salons when possible. Personal care products — which includes hair care — can have a massive impact on your health, and are one of the most important areas of your life to detox.

A 6-month investigation from Science magazine earlier this year uncovered evidence that findings from an influential study on Alzheimer’s were fabricated. The original study, published in Nature in 2006, posited that a certain type of protein formed sticky plaques in the brain, which were the primary cause of Alzheimer’s. This finding has informed over a decade of research and hundreds of millions of dollars in funding — but, it turns out, the study’s findings may have been based on fraudulent evidence. Read our full take here.

The Pervasive “Serotonin Theory of Depression” Is Debunked

After years of it being called into a question, a comprehensive, large-scale meta-analysis has determined that there is no scientific basis for the idea that a “serotonin imbalance” causes depression. This theory is incredibly pervasive in not only the general public but also clinical and academic settings, and is the justification behind the massive SSRI (antidepressant) industry — making this new study truly earth-shattering for the pharmaceutical industry. Read our full take here.

Though it seems like the distant past now, remember the formula shortage earlier this year? It was a massive problem that caused tremendous stress to parents everywhere and put countless babies at risk — and after the fact, alarming evidence emerged showing that it all could have been prevented. In fact, there were two smoking guns showing that the powers that be didn’t properly protect consumers: first, a federally-filed OSHA complaint (whistleblower) in February 2021 showed that Abbott (one of the biggest manufacturers of baby formula in the U.S. and the world, and whose plant shutdown triggered the formula shortage) knew about the problems at its plant for eight months and did nothing, endangering millions of babies. The same whistleblower filed another OSHA complaint eight months later in October 2021, and the factory finally shut down four months after that. Second,documents showed that the FDA investigated more formula-related infant deaths than it initially reported. Read our full take here.

After two full pandemic years, 2022 was the year of reckoning for a lot of things Covid-related. In our April wrap-up, we covered two big news items on the virus and vaccines: first, research showed that the natural immunity produced by contracting Covid-19 had a stronger protective effect than the vaccine, and second, the CDC suppressed data on how effective booster shots were for people ages 18-49. 2022 was also the year the J&J Covid vaccine was banned by the FDA for people under 18 for safety concerns and not advised for all others unless other Covid vaccines were not available. It was also the year that former White House COVID response coordinator Dr. Deborah Birx admitted “I knew these vaccines were not going to protect against infection…50% of the people who died from the Omicron surge were older, vaccinated.”  Read our full take here.

Epstein-Barr Virus Associated with Both MS and Long-Haul Covid

As we recently discussed with Dr. Kasey Holland, Epstein-Barr virus (EBV) is intimately related to many aspects of disease and health, and there were several studies this year underscoring this fact. In one, researchers found that EBV might be the single biggest cause of multiple sclerosis, while another found an association between reactivated EBV and long-haul Covid symptoms. Read our full take here.

Are there any pieces of health & wellness news from 2022 that we missed? What would you add? Let us know in the comments below!

Listen to this news round-up on The WellBe Podcast.

Don’t worry, we’re not going to ask you give up coffee. Rather, instead of making it a mindless, swing-by-the-coffee-shop-in-a-blur-on-the-way-to-work thing, take a minute to think ... 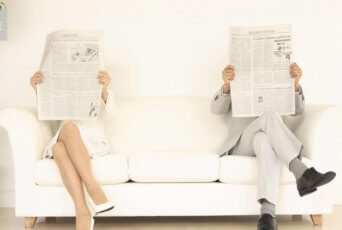 The WellBe Wrap-up: Health News & Research from February + March 2019 You Need to Know

Trying to stay on top of wellness and health news and events can be overwhelming. It’s a lot to digest (pun intended). We saved you the trouble. Here are 7 ...