There’s perhaps no piece of health (or life) advice more universally accepted than “wear sunscreen.” And yet, it’s actually a whole lot more complicated than those two simple words might imply. Sure, sunscreen helps shield you against skin cancer and other harmful effects of the sun, but the truth is that not all sunscreens are created equal — and some might be seriously harmful to your health. In this guide, we look at sunscreen ingredients to avoid, the risks of too much sunscreen, natural sunscreen alternatives, the best non-toxic sunscreen, and more.

The Health Risks of Sunscreen & Sunscreen Ingredients to Avoid

There are compelling reasons to shield yourself from the sun. According to the National Cancer Institute, the rate of new melanoma (skin cancer) cases in the United States has tripled since the 1970s, and one of the main risk factors for melanoma is too much sun exposure. Studies have shown that UV radiation from the sun makes it much more likely that a person will develop the deadly cancer.

Because of this, most sunscreens use chemical UV filters, which are rapidly absorbed by the skin, your body’s largest organ. Several of these chemical UV filters appear to be endocrine disruptors, meaning they may interfere with your hormones, which then can then create all sorts of other chronic health issues and diseases. According to the World Health Organization, endocrine disruptors are suspected of being associated with:

This is all pretty concerning. It’s especially troublesome in the case of sunscreen for children and babies, who are much more vulnerable to toxic chemicals. What’s more, many baby sunscreens advertised as “organic” and “natural” actually contain some of the most harmful chemicals. So to clear things up, we’ll lay out the sunscreen ingredients to avoid:

The FDA recently proposed new sunscreen regulations to better protect consumers, including requiring that all products with an SPF of 15 or above provide protection against UV/UVB rays. These changes are a step in the right direction, but they don’t do much about the dangers described above. One potentially positive effect is that the proposal would require that the active ingredient be listed on the front of the label, which would make it easier for savvy consumers to know if items purported to be “natural” and “organic” actually contain some of the sunscreen ingredients to avoid.

The risks of certain sunscreen ingredients don’t stop with human health: chemicals commonly used in sunscreens have been shown to not only disrupt human hormones, but also harm the environment. According to the EWG, oxybenzone damages the DNA of coral larvae, leading to damage and deformation of the coral; it can also contribute to coral bleaching and coral death.

The destruction caused is so serious that in May 2018, Hawaii passed a bill prohibiting the sale of sunscreens containing oxybenzone and octinoxate, which are used in at least 70% of sunscreens today. In July 2019, the US Virgin Islands passed a similar bill, banning all but coral-safe sunscreens beginning in March 2020. Florida considered a similar ban, but their governor recently signed a controversial bill preventing local governments from imposing these bans. California is still considering enacting a ban that would prohibit all but coral-safe sunscreen.

The Dangers of Too Much Sunscreen

While the risk of skin cancer is real, and the regulations above are designed to ensure consumers have adequate sun protection, there’s also the reverse argument: that too much sunscreen is bad, because we need more sun exposure for our health.

An increasing body of research supports the notion that we need a certain amount of sunlight, and that guidelines encouraging people to stay out of the sun as much as possible are actually dangerous. One striking study of 30,000 women over the course of 20 years showed that those who avoided the sun had a whole host of health issues, including autoimmune disease and life-threatening cancers. Other research has shown that sun exposure can lower blood pressure and protect against cardiovascular disease. All of this means that too much sunscreen could actually be harming your health rather than protecting it.

One of the main reasons that sun exposure is good for your health is because it helps your body produce and absorb vitamin D, a vital nutrient. When your skin is exposed to sunlight, it turns cholesterol into vitamin D that your body can use effectively. While supplements can help improve vitamin D levels, evidence suggests that they can’t replace sun exposure.

Vitamin D plays an important role in many aspects of your health, and nearly 40% of Americans are vitamin D deficient — perhaps in part because of too much sunscreen use. This matters a lot, because vitamin D deficiency has been linked to a ton of health issues, including osteoporosis, cancer, and even depression. As the world continues to grapple with the COVID-19 pandemic, the importance of vitamin D has come to light once again, as low levels of vitamin D have been associated with more severe and more fatal cases of the virus. (Learn more about vitamin D and your health in this in-depth article.)

So for the sake of the environment and your health, should you skip sunscreen altogether? Not exactly — but the EWG does recommend that you think of it as a last resort. Rather than reaching for the sunscreen as soon as you head for the door, opt first for natural sunscreen alternatives. Think about what other options you have to limit your sun exposure: Can you wear long sleeves and/or pants? Pack a hat? Carry an umbrella? Find some shade? All of these can be major mitigating factors that protect you from the sun without putting unsafe ingredients into your body.

You can also be wise about when you get your sun exposure. For instance, studies have shown that the sun is strongest and your body is best at synthesizing vitamin D around noon. This means that you can spend less time in the sun (ie, have less risk of skin damage) while still getting the sun exposure necessary for your health.

But what about those days at the beach or sunny park picnics, or when it’s just too darn hot to wear much of anything? First off, keep in mind the importance of vitamin D and risks of too much sunscreen. But if you’re going to be in the direct sun for more than 30 minutes, you’ll need to take precautions to protect yourself from skin damage. The best choice is to go with the natural sunscreen alternatives above, but the next-best option is to choose a non-toxic sunscreen without any of the harmful chemicals listed above.

If you want a sunscreen that keeps you safe inside and out, you’ll need to look for a mineral-based product. This is important because these mineral sunscreens don’t penetrate the skin, and therefore can’t mess with your hormones. Of course, not penetrating your skin means that you can’t fully rub the sunscreen in, which means you could look a bit like a ghost. We think it’s worth it, but if you’re not into that look, there’s hope: according to the Environmental Working Group executive summary, there has been a dramatic increase in mineral-only sunscreens since 2007, (more than doubling from 17% of products to 41%), which means there’s a much higher likelihood of finding a non-toxic sunscreen that rubs in completely.

In terms of ingredients when looking for a non-toxic sunscreen, you should keep an eye out for active ingredients like:

For a full list of WellBe-approved non-toxic sunscreen (plus 1,500+ more researched and vetted items, from clean food brands to sleep aids to beauty products and more), check out the WellBe Non-Toxic Product Database.

One other important thing to note is that, regardless of ingredients, you should avoid buying spray sunscreen. According to the EWG, when you apply spray sunscreen, your body inhales any toxic chemicals that are in the spray. Your lungs are a faster highway to your bloodstream than your skin, so this can be more detrimental to your health than chemicals in sunscreen lotion. If you absolutely can’t give up spray sunscreen, try to spray it directly against the palm of your hand, away from your face, and then rub it on your body. This should at least minimize how many chemical particles are released into the air for you to inhale.

The WellBe Takeaway On Sunscreen and Your Health

Sunscreen is a tricky issue. It can be incredibly important for protecting your health, but it’s also not as safe as many people think. Here’s what to remember about using sunscreen safely:

Do you have a favorite non-toxic sunscreen or natural sunscreen alternative? Tell us in the comments below! 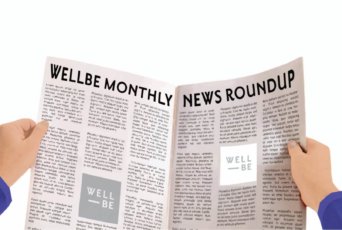 A new report found that no over-the-counter medicines (yep, not one) have really been proven to work well for coughs. Say what? ...

Personalized holistic health assistance and navigation for you and your family. Our team of advocates and researchers help with each step of healing a chronic health issue and building a holistic life and home.”