When it comes to dying or highlighting your hair, you might think the most important question is: what color? But the much more important thing to figure out is where to find the best organic salon near you. That’s because salons are full of harmful chemicals, so finding a non-toxic hair dye or options for natural hair highlights is super important for protecting your health. But don’t worry, you don’t have to give up your color routine to stay safe (and you might not even have to switch to an organic salon).

In this guide to organic hair salons, we look at the risks you face at the salon and steps you can take to protect yourself no matter what salon you frequent. To get our vetted recommendations for organic hair salons near you, you can download our free guide. It includes WellBe-approved salons in Atlanta, Boston, Chicago, Dallas, Houston, London, Los Angeles, New York, Philadelphia, Seattle, San Francisco, and Washington D.C., as well as our advice for those who don’t live in any of those cities.

Why Non-Toxic Hair Dye Is So Important for Your Health

Can you name your best friend’s OG hair color? This question might be tougher to answer than you think, because chances are that she dyes, or at least highlights, her hair. In fact, the most recent numbers indicate that 75% of American women color their hair, a number that’s been increasing dramatically over the decades. And while we love the freedom to play around with hair color, we also know that chemicals in hair dye — and other hair salon products — can cause some serious health issues, making non-toxic hair dye something we should all prioritize.

Think about it: it takes a lot to change the color of someone’s hair, especially if they’re making a drastic change (like from dark brown or black to blonde). So for decades, salons and major companies have turned to harsh chemicals to do the heavy lifting. While the specific formulations vary from product to product, there are a number of particularly harmful chemicals to be aware of when you’re coloring your hair:

What’s more, due to yet more loopholes, this time in the Toxic Control Substance Act, the FDA has no authority to require that companies test products for safety, meaning that the fact that your favorite salon carries a certain product doesn’t indicate anything about how safe it is. All of this makes finding a non-toxic hair dye both very important, and very difficult.

Other Harmful Chemicals in Hair Products

Unfortunately, even if you don’t color your hair, you’re probably still exposed to some dangerous chemicals at the hair salon. Just consider the fact that studies show salon workers have a higher risk of cancer than the general population, and it’s clear that there’s something in the air (literally) at most salons.

One particularly dangerous (and popular) salon treatment is the Brazilian Blowout, which contains formaldehyde. What’s worse, the formaldehyde exposure doesn’t end after the treatment: the fumes are reactivated every time heat is applied to the hair — so you not only get exposed to the chemical at the salon, but every time you dry, straighten, or curl your hair afterward. The chemical exposure from Brazilian Blowouts alone has been known to cause bloody noses, sore throats, rashes, and respiratory infections.

Other chemicals in common hair salon products — gels, sprays, mousses — have been associated with everything from asthma to neurological issues to birth defects to cancer. Here are some of the major culprits to look out for:

So given all of the above, it seems pretty clear that finding an organic salon should be a major priority for anyone — whether you’re dyeing, highlighting, cutting, or just blowing out your hair.

Ok I get it. So How Can I Find an Organic Hair Salon Near Me?

Luckily, as the wellness movement has gained momentum and consumers become more savvy, some hair salons are opting for more natural, organic approaches that reduce or completely eliminate your exposure to harsh chemicals. To spare you from hours of research or scouring Yelp reviews, we rounded up some great organic hair salon choices in major cities across the country.

To get our vetted recommendations for organic hair salons near you, download our free guide! It includes WellBe-approved salons in Atlanta, Boston, Chicago, Dallas, Houston, London, Los Angeles, New York, Philadelphia, Seattle, San Francisco, and Washington D.C., as well as our advice for those who don’t live in any of those cities.

If switching to an organic salon isn’t an option, or if you’re loyal to a non-organic salon for whatever reason (we get it — it takes a lot to find a stylist you love!), you don’t have to resign yourself to harmful chemical exposure. There are some simple steps you can take to make your salon experience healthier for both yourself and the environment, without sacrificing the style you’re looking for.

Here are a few ways to reduce your exposure to chemicals and create a pretty close approximation of an organic salon:

Conclusion: Organic Salon Takeaways and Your Next Steps

So the bottom line is this: most conventional salons contain chemicals that can be harmful to your health, raising the risk of all sorts of issues, from asthma to cancer to fetal damage in utero. A lot of these toxic chemicals come from the products and procedures associated with dying or highlighting your hair, which is why finding an organic salon that uses non-toxic hair dye is a must if you color your hair. However, other salon procedures — like Brazilian blowouts or even just the use of certain styling products — pose their own risks, making it important to do some investigating on what’s being used at your salon.

If you can, switch to an organic salon to keep yourself protected. Our handy guide to our fave organic salons in major cities (above) is a great place to start for recommendations. If you can’t, or don’t want to, make the switch, you can still protect yourself by taking a few steps prior to your next appointment

It’s true, the hair salon can be a scary place, but the good news is that it’s easier than ever to find an organic salon and natural, non-toxic hair dyes and styling products. And in the meantime, equipped with the knowledge above (and the product recommendations below!) you’ll be able to ensure that you’re making the safest, healthiest choices — while still having fun with your color. 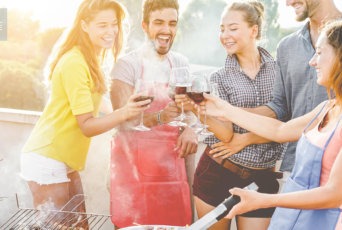 The WellBe Guide to Healthy Grilling

Nothing says innocent summer fun like throwing some meat on the grill and enjoying it al fresco with friends and family. The only thing is, grilling isn’t actually so innocent ... Today I'm running a special contest. A diet rich i

I'm not going to lie, the first week or two of the

When we all look back at this bizarre, scary and c

If you've said you can't workout at home during th